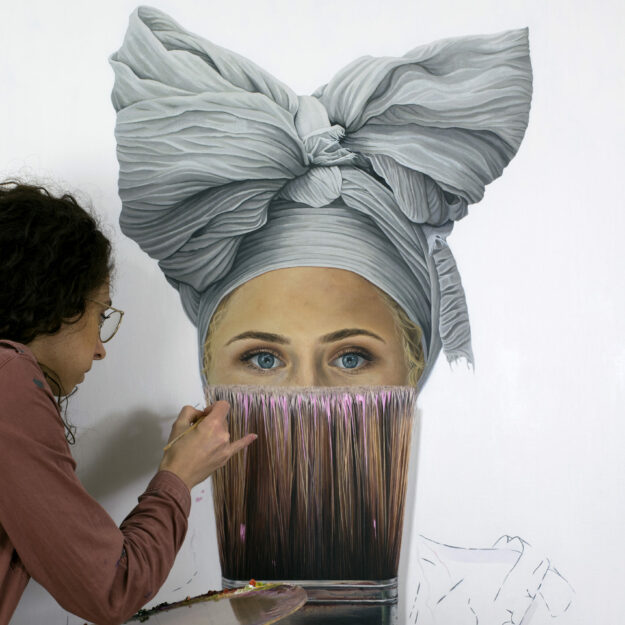 Jessica Oliveras was born in 1991 in Sant Joan Les Fonts, a small town near Barcelona. As her father is the Catalan Painter Josep Oliveras and her mother an Art books Director, she grew up surrounded by paintings and in the company of Artists and Arts Critics.

Her love of Art started at an early age when her father’s paintings became both a reference and a source of artistic inspiration for her.

Oliveras went on to develop a passion for romantic painters such as Delacroix, Girodet, and Marià Fortuny. She was particularly drawn to their exotic subjects, the exaggerated emotionalism and drama, and the orientalism which has inspired her own work. Later she became fascinated by the light used by painters such as Turner and Sorolla, having a strong influence on the use of whites in her own paintings.

Oliveras has been awarded prizes for her paintings in several collective exhibitions in Spain.  Some of her paintings have been published in Spanish Art Books, magazines, book covers and to the Catalan Olot TV, celebrating her artwork and her involvement in promoting culture.

The works of Jessica Oliveras are full of symbolism and allegory.  In her work, she went on to strike a balance between classic techniques of the hyperrealism with contemporary elements and a modern vision. Her intention is to immortalize the feelings and emotions arising from her subjects’ experiences. It is the narrative and the journey that Oliveras aims to capture and present to her audience – reacting upon the real power of embracing our fears and naked souls.

No products were found of this vendor!