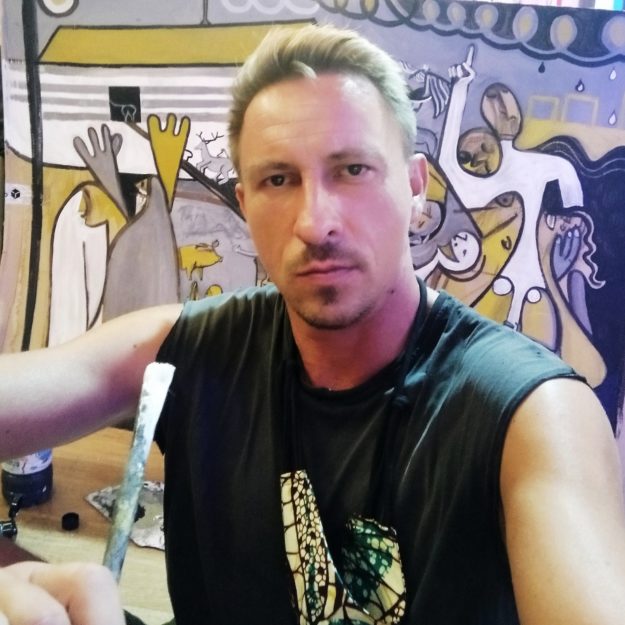 Born in Zabrze in 1981 into a working class family, Tomas was re-interpreting the world around him through drawings and sculpture from a very early age. "We were creative kids making things seemingly out of nothing and always in the most animated form" says the artist. based in Barcelona and inspired by the light of the mediterranean and the animated spanish-catalan culture, his works have been well received by an appreciative public and expectant critics alike. His paintings and sculpture make whimsical comment on todays contemporary society and together with a conceptual and abstract approach, he succeeds in creating works that both fascinate and draw the eye. These meticulously planned works resound and resonate with images created from the fantastical realm. By creating situations and breaking the passivity of the spectator, Tomas invites the observer to become part of the art as a kind of added component. "Art is entertainment" he says "people need to be able to touch and be touched by the work as well as to interact with the it”. The motivation behind a lot of his work is based on inspirational situations, visions that reflect a sensation of in-disputability and serene contemplation, combined with subtle details of the odd or eccentric and also humoristic elements too. By using popular themes such as sex, sexuality, family structure, religión and violence, he finds that human movement reveals an inherent awkwardness that echoes our own vulnerabilities. Tomas also considers movement as a metaphor for the inward seeking man or woman who experiences a feeling of loss of direction. By applying abstraction and exagerating the subjects emotion expression, he succeeds in increasing the dynamism and impact of the piece. "When painting or sculpting figures my intention is always to express a truth, an immediate reality, from joy to pain and every emotion in between. I want my creations to breathe, because when they breathe they resonate, and when they resonate they can speak Written by George Richie